Anna Marie Linehan Clouse, 93, died June 11, 2022, at St. Patrick’s Hospital. She was born in Fairmount, ND on September 22, 1928, to Daniel Linehan and Flora Mergens Linehan. Fairmount was a small town in Eastern North Dakota one mile from Minnesota and seven miles from South Dakota. Her grandfather, Peter Mergens was a pharmacist and owner of the Rexall Drug Store, and her father owned the barber shop. Her mother was a musician who played piano and organ for all the ministers, as well as for radio and silent movies, or anywhere music occurred in town. Music was in Anna Marie’s soul from early memories of playing piano, listening to the radio, and singing at home. She took formal voice lessons from the nuns in the academy in Hankinson, ND. She attended Fairmount public schools and won an oratorical medal for doing a patriotic talk for the American Legion contest when she was in grade school. She always had jobs babysitting, sweeping out the local theater and working at the drug store. She purchased her first bicycle with weekly payments from her various jobs.

Both of her parents went to college, so she went to the University of North Dakota in Grand Forks on the recommendation of her high school teacher. She was a small-town kid with much to learn at college. She quickly learned to study properly, manage her time, and to get good grades. They had a special room in Davis Hall where students gathered to socialize and play cards. She mastered the games of bridge and pinochle. Many of her college friendships continued throughout her long life. She was a member of the Glee Club singing group, Delta Psi Kappa, and she played softball and basketball. Also, in her senior year the Grand Forks American Association of University Women (AAUW) invited her to a luncheon and to become a member! She graduated with a teaching certificate and degrees in English and PE.

Her first teaching job was in Holdingford, MN where she worked like mad directing plays, coaching sports, teaching English and PE, as well as taking tickets at events. Her second teaching job was in North St. Paul, MN teaching English, PE, and her principle made her teach figure skating even though she didn’t know how to skate. Her life trajectory changed with her third teaching job in St. Clair Shores, MI, a suburb of Detroit, in 1952. This was an integrated school and her first experience teaching African American students. She was raised that diversity was important and to treat all people with respect regardless of their race, religion, or preferences. Within a week of teaching at the school she met Mr. Ferris Clouse who taught industrial arts. On their first date they went dancing and her life was changed forever. Their romance involved attending University of Michigan football games, Detroit Tiger baseball games, professional boxing matches, movies, drinking in a pub called DeSoppers, and going to auto shows. They were great dance partners. Anna Marie was impressed that he was a gentleman and knew it would be worth spending her life with him. Anna Marie and Ferris were married June 21, 1953, at Fairmount, ND. They went on a honeymoon to Battle Lake, MN and then toured the west where they fell in love with Montana and Yellowstone Park.

They moved to Miles City, MT in 1954 and to Missoula in 1955. They found a little farm on the dirt road called Russell Street and purchased it with money they didn’t have, for the land they dearly loved and resided there for the rest of their lives. They built their own home and started to build a family! They had eight children and she kept them out of trouble with many farm chores! Anna Marie also spent time as a substitute teacher in Missoula School District #1 and was the treasurer for the Missoula Federal Credit Union. Anna Marie and Ferris started the Pink Grizzly business by building a pink building in the summer of 1970. The building has been used to sell fireworks, arts & crafts, fruit, vegetables, greenhouse plants, and Christmas trees & wreaths. Anna Marie spent over 51 years selling 4th of July fireworks and you could always see her proudly as the “Mother of the Pink Grizzly” wearing her pink logo hat and shirt as well as carrying on a conversation with a customer.

She was not afraid of hard work and was constantly baking, canning, and making her special “Annie Ree’s” jams. Anna Marie and Ferris encouraged their children to be involved in 4-H, FFA, scouting, football, volleyball, basketball, wrestling, baseball, ballet, drama, music, band, and orchestra. She loved animals and the Clouse’s raised cats, dogs, chickens, ducks, horses, steers, dairy cows, sheep, and pigs. They grew a large garden with strawberries, raspberries, corn, beans, potatoes, onions and much more. The garden was a place to teach her children how to grow things and the value of hard work. They always had plenty of healthy food at the table from their little farm in the middle of town. The Clouse Family was the “Western Montana Fair Family” in 1981 to her joy. She loved writing and directing 4-H plays, attending Lady Griz games, writing Missoulian Letters to the Editor, working at elections, attending bridge club, picking raspberries, and especially loved a good party! If you told her something she had an amazing ability to remember it and weave it into her long stories in the conversations she had with family and friends.

In the 1980’s she returned to the University of Montana to update her teacher’s certificate the same time she had several children in college. It was a grand experience for her, and she dearly loved the journalism courses she took. She was a lifelong learner and a voracious reader and did the crossword puzzle and crypto quote daily.

Anna Marie was president of AAUW and one of the founders of the Welcome Wagon Newcomers Club in Missoula. She was a member of PTA, Alter Society, Orchard Homes Country Life club, and a 4-H leader. She was chairperson of the Christ the King and Country Crafts Bazaars. Anna Marie was on the Board of Directors of the Westside Little League, and a precinct #66 Democrat committee woman. She was chairperson of the first six book sales held by AAUW, which was the major fundraiser for fellowships for women. In 1982 they named an AAUW Fellowship in her honor. She also edited the AAUW newsletter and the Westside Little League Batter-up. She loved participating in Christian Women’s Club and attending Missoula Retired Teachers events!

Ferris and Anna Marie celebrated their 60th wedding anniversary on June 21, 2013, and he bought her a beautiful diamond necklace, which she always wore until the day she died. He passed away shortly after their 60th anniversary on July 5, 2013. After Ferris passed, she kept busy enjoying life and traveling to see her children.

She battled heart disease, skin cancer, appendicitis, a bad gall bladder, and thyroid problems. The Missoula medical community worked their magic, and she was always able to come home. Her last hospital stay involved having a pacemaker implanted, which solved her heart problems, but her body was slowly shutting down. She was a fighter to the end and wanted to spend more time with her family and really wanted to go home. She insisted on wearing her own colorful bathrobe and red lipstick. She got to spend time with all her children, grandchildren, and great grandchildren at the end either in-person or virtually. She made it home one last time when Garden City Funeral Home brought her body to her house for a private family gathering under the maple tree in her back yard, wearing a purple dress, one of her colorful hats, and her favorite cowboy boots! All family members got to share some words of wisdom and special thoughts about Mom/Grandma.

Donations can be made to the Anna Marie Linehan Clouse Memorial Fund at First Interstate Bank on Front Street in Missoula. The funds will be used to sponsor a scholarship for Hellgate High School students wishing to become a teacher or an AAUW scholarship.

A rosary service was held on June 11, 2022, for family at Garden City Funeral Home with Father John Wang presiding. There will be a memorial service at 11:00 am on September 2, 2022, at Christ the King Church, internment at the Western Montana Veterans Cemetery (1911 Tower Street) at 3:00 pm, and a reception and BBQ on Saturday, September 3rd at 5:00 pm to allow for fellowship and time to celebrate Anna Marie’s life with her large extended family and many friends. Honorary pallbearers will be her 17 grandchildren and 17 great grandchildren. 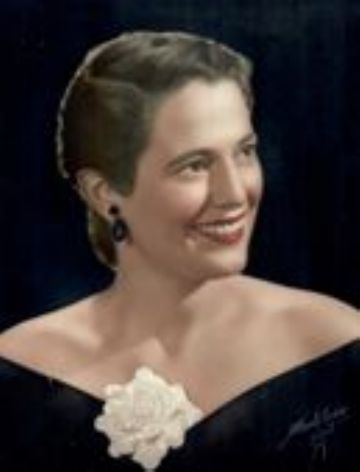